I Need a Kidney - My Dire Situation in My Own Words

My name is Josh.  I desperately need a kidney.

And I desperately need an angel with type O blood (or any blood type for a paired exchange with someone who has a type O donor but needs your type) willing to donate his/her kidney so that I may live.

I am 29 years old and I reside in Phoenix.  The kidneys that I was born with were perfectly good, but heavy doses of Motrin, prescribed by a well-meaning pediatrician when I was very young, burned those kidneys out causing them to fail.

Luckily my mother was able to donate one of her kidneys to me about fifteen years ago.  Unfortunately, due to some of the anti-rejection medicines that I was given, her donated kidney also failed after about 10 years.  For the past five years, I have been on dialysis every night for 11 hours per night.  That is not a long-term solution. 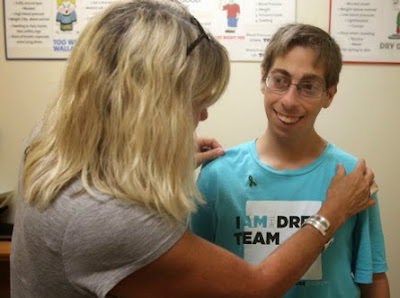 My mother Karen Tannen and Me

When I was very young, an orthopedic doctor diagnosed me with a leg problem and, unfortunately prescribed very high doses of liquid Motrin.  Motrin in high doses can be toxic to kidneys.  And it was in my case.  It basically burned out my kidneys through no fault of my own.

I began getting very sick during 5th grade.  I was in renal failure at age 11.  No child should have to experience that.

Kidney failure has prevented me from attending school and, as a result, I had to be home schooled.  My body was bloated and swollen all over.  I had high blood pressure, and I became essentially bound to a recliner in our living room.  I was in and out of hospitals frequently.  I could not attend a normal school.

By middle school, I was put on peritoneal dialysis.  Each day, my mother would set up my dialysis  machine and connect and disconnect me since I was too young to do it myself.

Eventually it became clear that, in order to save my life, I needed a kidney transplant.  Fortunately my mother was a sufficiently close match and, on June 16, 2002. my mother once again gave me the gift of life (the first time was when she brought me into this world).

I made a nice recovery and I was dialysis-free living a relatively normal life for close to 10 years.  I was even able to hold down a job at a grocery store for a while.  But, in the Spring of 2011, I began  having stomach issues and I started losing a lot of weight.  I lost about 20 pounds. By May 2011 I was taken to a local hospital emergency room.  After blood transfusions, emergency bone marrow biopsy and continued weakness, doctors diagnosed that my transplanted kidney that my mother donated to me had failed.

That was followed by an extended period of hospital visits, more transfusions and many more doctors at various hospital weighing in with their diagnosis.  The anti-rejection medications that I was prescribed were singled out as the likely cause of the failed transplanted kidney that I received from my mother.

In late October 2011 I began having trouble breathing.  That night I went to a hospital emergency room where it was determined that my lungs were filling with fluid and that my blood oxygen level was extremely low.

I underwent an emergency intubation under anesthesia to drain the fluid.  I came close to death that night.  While I was unconscious under anesthesia, doctors in the ICU started me on hemodialysis.  I remained in the hospital for about a week followed by daily sessions in a specialized hemodialysis center for several months.  The experience was extraordinarily taxing, causing me to pass out once.  It also gave me headaches and muscle cramps.

In January 2012, I began peritoneal dialysis which can be done at home.  Nevertheless, I still had to be hospitalized twice thereafter due to dehydration, extremely low blood pressure and elevated potassium levels in my blood.

I have been waiting ever since for someone to save me from this very difficult existence by donating a kidney.

Currently I am connected to a dialysis machine for 11 hours each night.  I have been waiting for a kidney donor to come forward for 5-1/2 years.

My mom and I have gone through a lot.  I just want a chance to have a normal life.

About 5,000 people in the U.S. die each year because they could not find a kidney donor.  I want to live.

Please watch these videos by a doctor at the Mayo Clinic and others about their experience as a donor or a recipient.

Here are some contacts points in case you or someone you know might be interested in considering the possibility of saving my life.